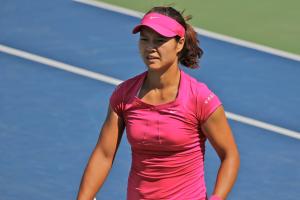 While the men are still building towards their ‘Asian swing’ climax at the Shanghai Masters next week, the women know that theirs is right now in Beijing.

This is the fourth and final Premier Mandatory tournament on the WTA tour, and with almost $5 million prize money at stake in a 60-woman draw, it is twice the size of the men’s event that shares the stunning National Tennis Centre in Beijing.

The 15,000-capacity Diamond Court, together with the 10,000 Lotus and 4,000 Moon courts, have taken tennis facilities to the level set by Shanghai’s ground-breaking venue: retractable roofs, natural and individualised air conditioning and the kind of personal service that has won plaudits from all the players.

Appropriate surroundings, then, for the deadly serious business afoot. For the door is closing on opportunities to gain valuable points by the women still hoping to reach the WTA Championships in Istanbul. After Beijing, there are only two more chances from the four remaining tournaments that fill the final two weeks of the season—and none offer such rich rewards as the China Open.

Four of the Championship places are already set in stone—injury permitting— for Victoria Azarenka, Maria Sharapova, Agnieszka Radwanska and Serena Williams. But injury can play a vital part at this late, exhausting stage of the season, as two of them know from experience.

Last year, Sharapova qualified at No2 but pulled out of Istanbul with an ankle injury.

Williams ended the year at No12 having failed to play any tournaments after the US Open due to illness. Had she played even a couple of the available tournaments, she would almost certainly have qualified.

Andrea Petkovic looked set to qualify when she reached the Beijing final last year to rise to a career-high No9 but then missed the remainder of the year with a knee injury.

And once again, injury may determine who is in and who is not when it comes to Istanbul. This week alone, nine women did not start—among them, the sick Williams.

The Beijing tournament began with a withdrawal list as long as your arm—among the nine being a sick Williams.

As the tournament progressed, three more fell by the wayside. The most significant of them was Sara Errani, at a career-high No7, who withdrew with a thigh injury. She not only has two women ahead of her in the race but four more breathing down her neck.

The primary contenders sandwiching Errani are those who currently lead the rankings race: At No5, Angelique Kerber; No6, Petra Kvitova; No8, Na Li; No9, Sam Stosur; and No10, Marion Bartoli. 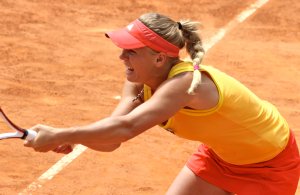 At No11, Caroline Wozniacki also has a chance of stealing one of the five remaining places on the plane—four there by right plus one alternate. And at No12, there could be one more, the winner in Tokyo last week, Nadia Petrova. She is some way adrift in points but may get her chance if injuries come into the reckoning.

And if anyone doubts the difference this month can make, they have only to look at Radwanska who was ranked just 13 in the race ahead of the 2011 Asian swing and, two titles later, qualified for Istanbul at No8.

So who are the favourites in the race to Istanbul 2012?

Istanbul may be one target ticked off the schedule but there is also the year-end No1 to play for. And Azarenka looks favourite to take the honours in her fourth Championships on both counts. She is in the third round in Beijing and facing a run of unseeded players towards a likely semi against Bartoli. She is also scheduled to play Linz and, in her outstanding form this year—and in this tournament—she should be favourite for the WTA title.

This is the Russian’s sixth time to qualify but she has not won the year-end trophy since 2004. That then will be her highest priority. She has reached the third round in Beijing but is not scheduled to play another event before Istanbul: No doubt her late injury this time last year weighs heavy in her plans.

Twice the WTA Champion before—in 2001 and 2009—she may relish the prospect of closing a remarkable year of achievements, including wins at Wimbledon, the Olympics and the US Open, with a third. She has nothing else scheduled before Istanbul and, if sickness does not keep her away as it did last year, she could well win the hat-trick.

This is Radwanska’s fourth time to qualify, but in her previous three visits to the Championships—2008, 2009 and last year—she faded before the semis. As defending champion in Beijing, she has looked battle-weary, carrying strapping to shoulder and thigh, but has still made it, thus far, to the quarters. A rest between now and Istanbul should boost her chances to progress further in what has been her best ever season.

The German looks set to be the next qualifier to reach her first Championships. She has gone from strength to strength this year to attain a career-high ranking, reached the semis in Tokyo and faces Wozniacki for a quarterfinal place in Beijing. She is also scheduled to play in Luxembourg so, barring disaster, should book her place safely.

The defending Istanbul champion has floundered on the brink of qualification. Just points behind Kerber, she lost in the first round in Tokyo and the second round in Bejing. She may therefore look for a wild card at Linz, where she is defending champion, to ensure qualification.

The Italian may still manage to qualify for her first Championships if her injury permits her to play in Moscow as scheduled: Only time will tell. It would be an appropriate conclusion for the petite late-bloomer who reached the French Open final, the US Open semis and leapt from 45 to No7 in a single season.

Li qualified for the Championships for only her first time last year but fell in the early stages. She still has some work to do this year: Since her strong US Open series, she has lost some momentum. She fell in the second round in Tokyo but still contests a quarterfinal place in Beijing. Should she not make it that far, she too may consider a wild card, perhaps into Osaka. It may depend, though, on how the following pack performs.

The Australian reached the Championship semis in 2010 and last year, and she looked in a strong position to qualify again this year after reaching the semis in Tokyo. But she lost her opener in an error-strewn meeting with Julia Goerges in Beijing. Her chances are not over, though: She is scheduled for Osaka, where she reached the final last year, and Moscow, so should earn enough to qualify. 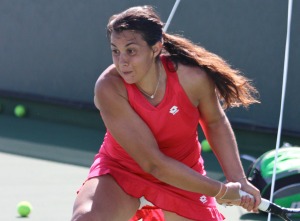 The French woman qualified in 2007 and last year—despite an end-of-year injury—and is making a similar late surge in this year’s Asian swing. Already in the quarters in Beijing, and with a good chance of a semi place, she is then scheduled to bypass Osaka, where she is defending champion, in favour of bigger points of Moscow. Her work ethic and constant determination to improve every part of her game will keep her in contention.

After a relatively poor year, the former No1 has found some form at the end of the season—the title in Seoul and the quarters in Tokyo—to leave her with a chance to qualify for the Championships for a fourth time. She must get past Kerber to reach the Beijing quarters—a big ask—and may look for a wild card next week if she fails.

After a second-round exit in Beijing, the Russian’s chances of qualifying for the fourth time look very slight without some withdrawals above her. However, she can help her cause if she makes points in Moscow next week.