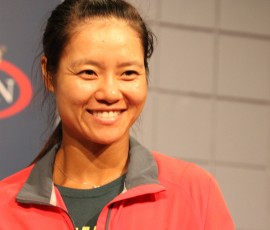 It became one of the more unexpected line-ups, the 2014 Australian Open women’s final.

A fortnight ago, the talk was not of whether Serena Williams would reach the final but who would be her opponent there—and it was hard to see beyond the two-time defending champion, Victoria Azarenka.

But Melbourne has seen more than its share of upsets, and Azarenka, like the men’s defending champion Novak Djokovic, did not even make the semis. And that was not the end of the story in the bottom half of the draw, for a small, bubbling ball of energy, the No20 seed Dominika Cibulkova, was cutting a swathe through the biggest names.

First it was a former Grand Slam champion, Francesca Schiavone, then no fewer than four higher seeds, among them No3 Maria Sharapova and No5 Agnieszka Radwanska.

She won the hearts of the Australian crowds as much with her personality as her giant-killing brand of tennis. This 5ft 3in dynamo could not stop smiling, fighting and winning, and she became the first Slovak ever to reach a Grand Slam final. Not bad for a woman who had only once got as far as the fourth round here, back in 2009—the year of her only other Major semi-final at Roland Garros.

But the Australian Open is the “Grand Slam of Asia-Pacific”, and if there’s one player, man or woman, who has put Asia on the tennis map and captured the imagination of her vast home nation of China, it is Na Li.

Coming from the fastest-growing tennis market in the world, Li was the first Asian player to win a Major in Paris in 2011, and this year she appeared on the cover of Time magazine, named one of the world’s 100 most influential people.

Last year’s Australian Open, though, had been a heart-breaker. Leading Azarenka by a set in the final, she had two bad falls and saw the trophy end up in her opponent’s hands. It was all the tougher to take having also led Kim Clijsters by a set in 2011, only to lose that final, too. But perhaps this year, destiny was on Li’s side.

2014 started well with the defence of her Shenzhen title, but the charismatic 31-year-old also arrived on the back of one of her most consistent seasons.

This late bloomer—smart enough to have a university degree, witty enough to pack every press conference, popular enough to earn more endorsements than any woman except Sharapova—didn’t play her first Major until 2005, and made only two quarter-final runs before reaching the semis in Melbourne in 2010.

In 2011, after that final finish in Australia, she won the French Open, and bounced back from 2012 slump to reach not just the Melbourne final last year but also the quarters at Wimbledon and a career-first semi run in New York.

These were the fruits of an unflagging determination for improvement. She had taken on a demanding coach—Carlos Rodriguez insists on punishing regimes—and ended 2013 at a career-high No3. Against the best-of-the-best at the WTA Championships in Istanbul, she lost only to Williams.

Come Melbourne, good fortune seemed to reward her efforts. While Cibulkova had bustled her way to the final the hard way, Li had seen the biggest names fall ahead of her. With Petra Kvitova and Angelique Kerber cleared in her quarter, Li would not face a top-20 player in the entire tournament—and most notably would not have to meet Williams in the semis: the top seed was put out in the fourth round. She even survived a match-point in the third round when a forehand from Lucie Safarova went centimetres long.

Her close shave galvanised the Chinese super-star, who lost only 12 games in her subsequent three matches. But the final piece in the jigsaw was Cibulkova herself: Li had played her four times and beaten her four times.

Perhaps not surprisingly, both looked tight with nerves when their latest match got under way, and balls flew long or into the net. Cibulkova straight away faced two break points and her second double fault gave Li the lead.

Li cranked up early errors, too, but managed to hold. However, they ground through the first games with neither finding range nor consistency: four games and 10 errors apiece.

Finally in the fifth game, a 22-shot rally got the players and the crowd going…as well as Cibulkova. Li, still firmly in the grip of nerves, twice doubled faulted to give the break back and, as if to press the point, Cibulkova held to 15 and looked increasingly energised and confident.

Li’s serving and backhand were, thus far, a liability: just 13 percent of her first serves had found their mark and she was at 20 errors to only 11 winners. She needed to find some form, and quickly.

Not that Cibulkova had found any fluency, either: just three winners to 13 errors, but it was enough to keep her in the rallies. Li sacrificed another break chance at 4-4 with an overhit forehand, but she finally broke through with her signature cross-court backhand—one of the crispest and most poised backhands in women’s tennis—to serve for the set.

Still she could not string the points together, one minute making a cracking winner, the next just missing the line, and a gutsy Cibulkova broke back. They would decide the set in a tie-break.

Now Li came alive, shed her nerves and grabbed the first point with a forehand winner on return of serve. She strung together some great strikes—a drive volley winner, a strong first serve, another backhand—to lead 5-1 at the change of ends, and served out, 7-3. The Rod Laver arena cheered as one, and the shackles finally came off Li.

Having survived a crisis, Li began to play like a champion-in-waiting, lost her inhibitions and began to hit clean, flat angles to the lines in ruthless style.

That gave her the confidence to attack the net, too, and her serving percentage hit almost 80 percent. She broke in the second game and, with her winners rising to double figures and her errors limited to what she could count on one hand, she raced away in real style, 6-0.

It was a score-line that did little justice to the battling Cibulkova, whose spirit did not flag for a minute. As she had throughout the tournament, she smiled in defeat, but there was no hiding the crowd’s delight. Australia has taken Li to its heart—and the feeling it mutual.

As always with Li, there was laughter: To her agent, she said, “Thanks for making me rich!” To her husband, thanks for being “a very nice guy”, before adding, “He is also lucky—he has me!”

But then came the serious: “I have to say this is my favourite Grand Slam. I cannot wait to come back.”

Li  reclaimed the No3 rankings two days later to move within 12 points of No2. And having survived the nerves of playing for the Major that means the most, she will believe that another career-high rankings is within her grasp. As she said ahead of the final:

If I don’t improve, I can stay in the top 10 or top 20, but I can’t be the best in the world. So I really want to keep pushing myself to change.

When Li is on song, her balance, footwork and clean shot-making are a joy. When she turns 32 next month, she will also be as fit and confident as she has ever been. It’s a winning combination from this iron-willed but most charming of champions.