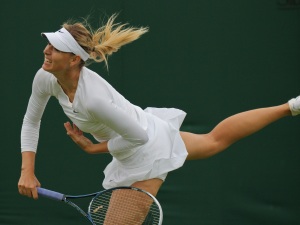 It happened to be one of those days that this tennis fan will remember for a very long time.

It was 2004, and a young, tall, pretty teenager took to Wimbledon’s Centre Court to try her luck at winning the women’s title from the two-time defending champion Serena Williams.

The brilliant American, herself still only 22 years old, had beaten her elder sister, Venus, in 2002 and 2003, but this time, the opponent was the 17-year-old Maria Sharapova.

The Russian who had moved away from her home to develop her passion in the US as a mere nine-year-old was brave, but few gave her a chance. Yet she was already proving to be one of the most determined athletes in the sport.

At 16, ranked 91, she had reached the fourth round at Wimbledon having already come through qualifying in Birmingham to reach the semis. She went on to win the Japan Open and Quebec titles and reach the semis in Luxembourg to end the year ranked 32.

Before her ground-breaking Grand Slam run in 2004, she had repeated in Birmingham, having already reached the quarters at Roland Garros, and by Wimbledon, she had climbed to No15 in the rankings.

Even so, Williams was a metaphorical mountain to climb, with five Grand Slams to her name. What’s more, she had beaten Sharapova in their first ever meeting in Miami. Sharapova recalled:

I had played Serena a few months before for the very first time in my career. I was quite overwhelmed by her power, by her physicality. She was everywhere on the court, and I remember feeling that type of ball and that pace was very different to any other opponent I’d played against.

But I don’t remember going into that final being intimidated by what she had presented. I was a very fearless competitor.

And it showed: She beat Williams 6-1, 6-4, to claim a famous victory, but it was far from being a one-off. She went on to beat Williams again at the WTA Championships at the end of the year, topped the rankings in 2005, won the US Open in 2006 and the Australian Open in 2008.

Three weeks ago, she defended her French Open title, taking the tally of Grand Slams to five and her total resume to 32. But fate dealt her a blow at her peak, a persistent shoulder injury that ended with surgery in 2008. The closest she has come to repeating her Wimbledon victory was runner-up in 2011.

Last year, she lost in the second round, adding a little more incentive in this her 10th anniversary year—not that she is one to look back but rather to drive forward.

I don’t think about that victory very often…[but] when I do, it seems so fresh and it seems like it almost happened yesterday. It’s been 10 years and I’m here, still competing at a high level and still have the motivation.

I certainly had that drive when I was 17 years old, and I’m proud that I still have that going into this age group, still going out and competing and loving what I do so much.

In the last couple years my results were certainly nowhere near I would have wanted them to be. That’s something that I hope to change around this year. I’m looking forward to that. I’m determined to do that.

In an unexpected turn in the Sharapova career, it became clay where she has excelled. Since 2012, she has won seven titles, a 54-4 run. It’s fair to say, after her Roland Garros victory, that she was again close to the form of her life, rising back up the rankings after missing the end of 2013 with injury.

But her love of grass endured:

I remember liking it from the first time I played on it. I think you either just like something or you don’t. And I think because it’s so rare, I love those unexpected moments, the bounce is low and you’ve got to be quick, and all those things.

She made just the start she would have wanted at Wimbledon too, beating British wildcard Samantha Murray 6-1, 6-0, though she would fall in the fourth round to Angelique Kerber in three tough sets.

She knew already that there would be no repeat of the 2004 final for, in an unfortunate twist of the draw, she was scheduled to face Williams in the quarter-finals—unfortunate because, since that heady 2004, Sharapova has never beaten her nemesis Williams again. As it happens, Williams fell short of the quarters, too, in Round 3.

Their paths have yet to cross again, but it is 32-year-old Williams who once more tops the world rankings. And the mighty Serena has now notched up 72 wins from 80 matches at Wimbledon, and has since gone on to win Stanford, Cincinnati and the US Open.

But Sharapova it not one to let negativity enter into the equation:

I’ve had my fair share of success and also tough results. [Wimbledon] really jump‑started my career from a very young age. But I don’t look back to that very often, because I treat every year and every tournament as a fresh and new start. I try to make it a new beginning.

Yet Sharapova’s story since winning on London’s lawns 10 years ago is not the only reason she has stuck in this particular memory bank. For I watched that 2004 title-winning match with my father, who emerged very late in life as a fellow tennis fan.

He fell for Maria as soon as he saw her, so we rooted for her together. She was, my dad fondly said, a bit like my own daughter, by then 20 years old.

He and I would share other passions that he had kept under wraps during my mother’s life—from opera, to ballet to ABBA—but he also pointed out that he shared one thing with Maria, too: His birthday.

Sadly he would not see her win another Grand Slam. Perhaps, one day, I will.